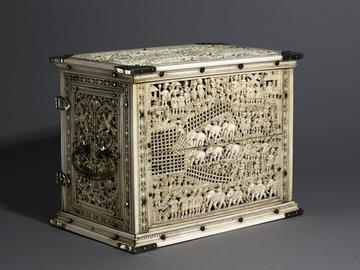 The discipline of history of art is an object-based cultural history founded on the basis that objects represent and reflect the ideas and values of people who commissioned, created, used and collected them. The objects are primary sources documenting the changes in social, religious, economic, and political ideas within their historical contexts. Thus, the history of art is inherently an interdisciplinary and cross-cultural subject that illuminates our shared society and identity, similarities as well as differences.

Material culture in South Asia presents a remarkable case study in the creation of a visual vocabulary and language of meaning. Students will be encouraged to explore a range of visual and material culture within its historical, political and social context on the Indian subcontinent. The function, trade and/or diplomatic exchange of objects, and ideas with regard to technology and transcultural identities will in large part be the subject of the eight weekly classes (2 hours each) in this option.

No previous experience is necessary or expected in the study of art history, archaeology, material and visual culture. The weekly classes will identify and explore various issues surrounding the use and exchange of material visual culture in and from modern South Asia. It is intended that students should develop a critical ability to place material culture in their historical and regional contexts in South Asia, while also exploring visual culture as features of socio-economic and political conditions.

Giorgio Riello. Cotton: The Fabric that Made the Modern World (Cambridge 2015)