From Governor Generals to Freedom Fighters to Rhodes Scholars and everything in between, Oxford University has a rich history of engaging with the states and societies of South Asia, and with scholars and peoples from across the region. 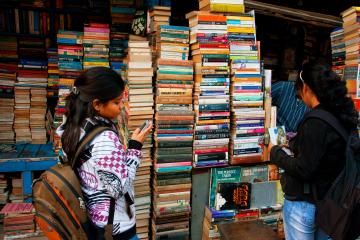 CSASP also participates in the new Area Studies DPhil programme. We are delighted that the first two South Asianists to study on this programme arrived in Michaelmas term 2018 with another in 2020. This programme is also now closed to applications for entry in October 2022 and will reopen for applications for 2023 entry in September 2022.

CSASP has a growing post-doctoral community. We also host occasional visiting scholars; recent research projects have included Masculinity in Indian Cinema, Gender in South Asia and Sports as Soft Power Diplomacy in South Asia. In 2020 we welcomed the inaugural cohort of Rangoonwala Visiting Fellows and we will shortly be hosting our second Charles Wallace Trust Visiting Fellow for Pakistan.

We collaborate with the Faculties of Oriental Studies and History, the Ashmolean Museum and the Oxford Department of International Development on the Modern South Asian Studies seminar series which is hosted by St Antony's College and administered by the Asian Studies Centre. Recent Conferences organised by CSASP include: Pakistan - Political Economy of a Transforming Society; Punjab Research Group Conference; Caste in South Asia and its Diasporas; India under Narendra Modi: Reconsidering Indian foreign policy; and the Political Economy of Development in India. We run occasional Chatham House style events with closed invitation lists that enable students to ask more penetrating/revealing questions. Recent events have included discussions with a senior Pakistani military officer, a well-known BBC investigative journalist and a senior member of the Indian Prime Minister’s Office. In conjunction with Wolfson College, CSASP organised the inaugural Foreign and Commonwealth Office Oxford day in 2017. We hosted 50 members of the FCO, Ministry of Defence and Department for International Development for a day of lectures and discussion organised by the CSASP staff. Another such event was organised in 2019.

CSASP hosts two annual staff and student exchanges, with Warsaw University (Poland) and the Lahore School of Economics (Pakistan) to which interested students are welcome to apply.

Other events we organise include tours of the Oxford Ashmolean Museum with a South Asia theme, termly Documentary Discussion evenings, with presentations by the director and, in conjunction with Wolfson College, the Annual Sarfraz Pakistan Lecture.