Themes in the Study of South Asian Religions

Themes in the Study of South Asian Religions 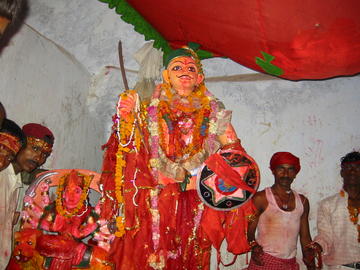 The Saint Ravidas celebration in Bihar

Observers from both inside and outside South Asia have often claimed that a distinctive characteristic of the region is the importance of ‘religious’ identities across a spectrum of cultural, social and political life. This optional course will enquire into such claims, taking a comparative perspective that seeks to compare trends and practices across many of South Asia’s major religious traditions, including Hinduism, Islam and Buddhism, in relation to each other. The course will combine historical and anthropological approaches to explore the longer term development of the subcontinent’s religious life, and will give attention to the historical formation of these religious traditions from the early modern period to the present day.  Students will be encouraged to examine the plural histories of these religious traditions, and the internal struggles which often accompanied their ‘modernisation’.

Through a series of eight classes and lectures, the course will investigate a broad range of subjects that may include the historic interlinkages of religion, kingship and power in South Asia; the impact of colonialism upon religion; trajectories of reform and renewal in religious traditions; the distinctions and relations between textual and lived forms of religion; and the connections between religion, politics and nationalism in modern South Asia. While examining multiple religious traditions in parallel, students will also be encouraged to focus on individual traditions of particular interest.