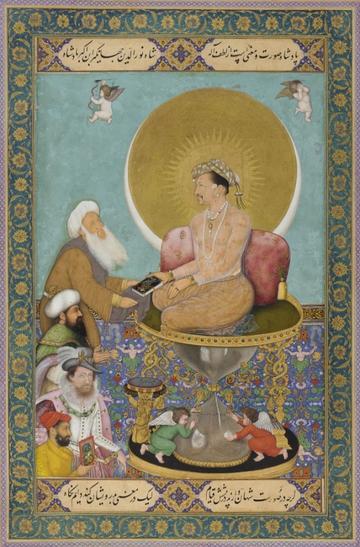 Jahangir Preferring a Sufi Shaikh to Kings, from the St. Petersburg album

Far-reaching social and economic changes took place across the Mughal world during what historians call the ‘early modern’ centuries. The inflow of silver enabled states across the region to begin to make their transactions in cash. Peasant communities in ecologically favoured areas moved into cash cropping for the market. The growth of gentry elites in the towns saw new markets for luxury goods of all kinds, from paintings and fine manuscripts, to cloth, jewellery and metalwork. The new importance of cash and commerce brought merchant and banking families to new positions of India-wide influence and power. These were centuries of great social mobility, as skilled people of all kinds – craftsmen, peasant farmers, military men, scribal people and service communities moved into and across the subcontinent in search of opportunity.

India in the seventeenth and eighteenth centuries was very much the workshop of the world and open for business. Its craft manufactures, well-established credit facilities and open access made it a magnet for European trading companies. These were also, and paradoxically, the features that enabled the East India Company to enter the Indian arena, first as a provider of commercial and military services, and then, in the context of Mughal imperial decline, as the subcontinent’s new political overlords.

This option offers the chance to explore some fascinating debates about India and the world in this period. How far were Indian trajectories of social development fundamentally altered during this early era of globalisation? Did structures of class, caste, religious community and regional cultures develop distinctive new forms after India’s ‘medieval’ centuries and before the coming of colonialism?  How far can we say that India in this period shared in early forms of ‘modernity’?