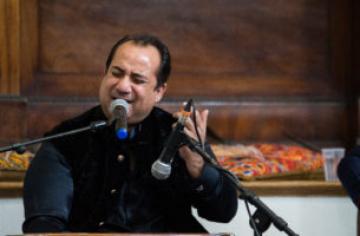 The Faculty of Music is delighted to announce that renowned Pakistani Singer Rahat Fateh Ali Khan is to give a once in a lifetime concert at Oxford University’s Sheldonian Theatre.

The fundraising concert will be held at 8pm on Thursday 25 May with Khan generously donating the proceeds to support the work of the Faculty of Music. The Faculty plans to use the funds to invest in further concerts that promote musicians from diverse backgrounds. Khan also plans to donate a harmonium played by his celebrated uncle, Ustad Nusrat Fateh Ali Khan, and the money raised will help to support the upkeep of this instrument.

Rahat Fateh Ali Khan is a popular Pakistani singer, primarily of Qawwali, the devotional music of the Muslim Sufis. He began his career at the age of three, performing and studying under the tutelage of the ‘King of Qawwali’, Ustad Nusrat Fateh Ali Khan. Since then he has taken on the responsibility of carrying forward his 600-year-old family legacy by spreading qawwali to audiences across the globe. He has also gained a vast following through his work in Bollywood and has regularly sold out arena tours in the UK, the US, the Middle East and India.

Khan will perform alongside The Fusion Project, an ensemble of students from Oxford University brought together by their shared mission to revive and make accessible the beauty of Indian Classical Arts.

The programme will consist of a series of original fusion compositions and qawwalis arranged and produced by Rushil Ranjan, the lead singer and guitarist of the Fusion Project. Along with Khan’s impressive vocals they will feature western vocals, tabla drums and a bansuri.

Professor Michael Burden, Chair of the Music Faculty Board said:

‘We are delighted to be hosting this event at the University of Oxford. The music of Rahat Fateh Ali Khan is a force on the international scene, and we are extremely grateful to the student group – The Fusion Project – for involving us in the event.’

Tickets are available from: This Is Good Music.