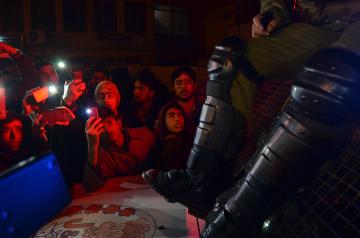 Photography in Kashmir has emerged as a powerful witness to its troubled present. Rooted in the everyday of photojournalism, and stretching away from those limits when they can, a remarkable new generation of photographers have steadily illuminated a little understood period of Kashmir’s contemporary life. Over the last three decades their work has also demonstrated the radical part that can be played by photographs in subverting the established views – of Kashmir as a beautiful landscape sans people; or as an innocent paradise; and more recently, of a paradise beset by mindless violence. Witness to Paradise is a curated book project that brings together images by nine photographers from Kashmir, the oldest already a working professional in 1986, and the youngest not yet twenty in 2016. The images are by Meraj Uddin, Javeed Shah, Dar Yasin, Javed Dar, Altaf Qadri, Sumit Dayal, Showkat Nanda, Syed Shahriyar and Azaan Shah. The text has emerged from conversations with documentary filmmaker Sanjay Kak, and brings out the varied relationships that each one bears to photography, and their commitment to Kashmir, raising quietly profound questions about the place of artistic practice in zones of conflict.

Sanjay Kak is an independent documentary film-maker whose recent work reflects his interests in ecology, alternatives and resistance politics. His films include Red Ant Dream (2013) about the persistence of the revolutionary ideal in India, Jashn-e-Azadi (How we celebrate freedom, 2007) about the idea of freedom in Kashmir, Words on Water (2002) about the struggle against the Narmada dams in central India, and In the forest hangs a bridge (1999), about the making of a thousand foot bridge of cane and bamboo in North-East India. His film work also includes One Weapon (1997), a video about democracy in the 50th year of Indian independence, and twinned films on the theme of migration, looking at people of Indian origin in the fringes of the city of London in This Land, My Land, Eng-land! (1993) and in post-apartheid South Africa in A House and a Home (1993), as well as Cambodia: Angkor Remembered (1990), a reflection on the monument and its place in Khmer society.

The South Asia Seminar is organised with the support of the History Faculty.