South Asia Seminar: The Colloquy between Muhammad and Saytān: The Eighteenth-Century Bangla Iblichnāmā of Garībullā 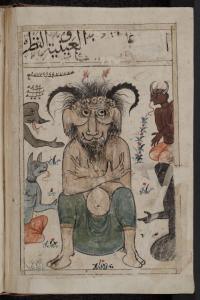 In 1287 b.s. [=1879/80 c.e.] a short Bangla work was published in Calcutta under the title of Iblichnāmār punthi by the highly productive scholar Garībullā, who had composed the text about a century earlier. This somewhat unusual text is a colloquy between the Prophet Muhammad and the fallen Iblich (Ar. Iblīs), also called Saytān. The reader is offered humorous, often naughty descriptions of the depraved and licentious acts of Saytān’s lackeys, parodies of the standard ’aḥādīthliteratures regarding proper conduct—everything a good practicing Muslim is not! This fictional inversion of all that is good and proper titillates the reader in its mad escape from the Bakhtinian monologic of theology, history, and law that governs the discourse of the conservative Sunni mainstream. It is the exaggerated negative image of the law as seen from the imagined squalid underbelly of Bengali society.

Tony K. Stewart is the Gertrude Conaway Vanderbilt Chair in Humanities Professor and Chair, Department of Religious Studies at Vanderbuilt University. His recent monograph, The Final Word: the Caitanya Caritamrta and the Grammar of Religious Tradition (Oxford, 2010), focused on the creation of the Gaudiya Vaisnava movement, and was preceded a translation of the key text, produced with the late Edward C. Dimock, Jr. (Harvard Oriental Series, 1999). In Fabulous Females and Peerless Pirs (Oxford 2004) Professor Stewart translated eight tales on the ways women, aided by Satya Pir, keep the world ordered in the wake of male-generated chaos. This literature in turn pointed to his current project, tentatively titled Romance of the Pirs: Fictive Discourse in Early Modern Bengali Sufism, which examines how the Islamic imaginaire insinuated itself into a Bengali consciousness.

Professor Stewart will give another guest lecture on a related topic, ‘When Muslim and Hindu Worlds Meet in Fiction: Mapping the Bengali Imaginaire’ on Thursday, February 16th at 2 pm in the Library of the Oxford Centre for Hindu Studies.

The Majewski Lecture, Hilary Term 2017. The South Asia seminar series is organised with the support of the History Faculty.