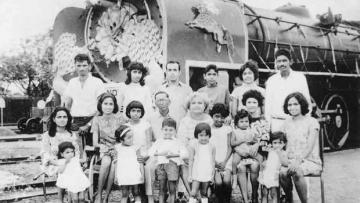 Despite the fact that India’s Anglo-Indians migrated en masse following Independence in 1947 and have spent almost 70 years as a settler-community, they remain relatively unknown in the United Kingdom and rarely counted among South Asia’s diaspora. This seminar will address their trajectory from immigrants who faced hostility and rejection in the Post-World War II era to a well-established and well-accepted ethnic minority in the multi-cultural environment of contemporary Britain. It will also analyse reasons for their ‘invisibility’ and the cultural erasure this assimilation has engendered.

Rochelle Almeida, Professor of South Asian Studies in the Global Liberal Studies Programme at New York University, has also held the position of Senior Associate Member at St Antony’s College. She earned a PhD in English from the University of Bombay and a Doctor of Arts degree from St John’s University, New York. She is the author of Originality and Imitation: Indianness in the Novels of Kamala Markandaya, and The Politics of Mourning: Grief-Management in Cross-Cultural Fiction. Professor Almeida has co-edited Global Secularisms in a Post-Secular Age and Curtain Call: Anglo-Indian Reflections. Her next two books, Britain’s Anglo-Indians: The Invisibility of Assimilation and Goa: A Post-Colonial Society Between Cultures, will be published in 2017 by Lexington Books, Maryland, and Goa 1554 Books respectively. The recipient of research grants from the US National Endowment for the Humanities, the Liberal Studies Program at NYU, she was a Global Research Initiatives Fellow at NYU-London during the Fall 2016 semester. As an international freelance writer, she divides her time between Connecticut and Bombay.