Mariyam Kamil and the Oxford BAME Drama Society are really excited to be welcoming the Qadir Ali Baig Theatre Foundation to Oxford to stage their critically acclaimed play 'Quli: Prince of Hearts' fresh off their run at the Edinburgh Fringe.

Hailed as an "Indian Masterpiece" by the European media, "Mesmerizing" by the press in the US and "Enchanting" in Edinburgh, Qadir Ali Baig Theatre Foundation's celebrated heritage play ‘Quli: Dilon ka Shahzaada/’Quli:Prince of Hearts’ is based on the historic love-legend of the founder of the aesthetic city of Hyderabad, poet-king Quli Qutub Shah and his danseuse beloved Bhagmati.

Universal and timeless in its theme, it is a touching tale of two mutually-respecting artistes whose soulful love overcame political and cultural barriers. With a blend of Indian classical music, period costumes, jewellery and decor, the play takes the audience back in time to the 17th century kingdom of Golconda through a philosophical tale of true love. ‘Quli: Dilon ka Shahzaada’ has been the toast of a score of festivals and venues in several countries and had a week-long run at Edinburgh Festival Fringe, featured at Herisson en Fete in France and was performed in Turkey, Canada and USA.

Tickets are FREE but please register you interest via the ticket link as spaces are limited: https://www.eventbrite.co.uk/e/quli-prince-of-hearts-the-qadir-ali-baig-theatre-foundation-tickets-52748953540 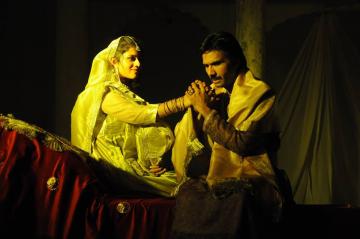