Free Film Screening: 'Court' with an introduction by Mayur Suresh 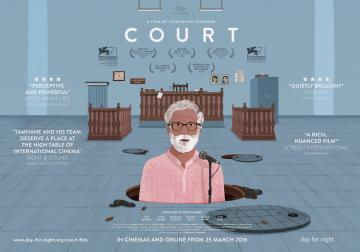 The Foundation for Law, Justice and Society in association with Wolfson College and the Centre for Socio-Legal Studies, University of Oxford invites you to:

With an introduction by Mayur Suresh, expert on India's anti-terror law, SOAS

To mark the 70th anniversary of the Partition of India, we take a look at the legacy of colonialism through the Indian justice system, with this Winner of Best Feature Film at the National Film Awards.

Court is a funny and understated depiction of the trial of an ageing folk singer, facing the absurd accusation of having performed an inflamatory song that may have incited the suicide of a sewage worker.

Inspired by the incarceration of a musician and activist wrongfully accused of taking part in the Chilkari massacre in 2007, director Chaitanya Tamhane won the Lion of the Future award at the Venice Film Festival for this quiet critique of India's sedition law, introduced by the British during the independence struggle and revived under today's Hindu nationalist government.

Mayur Suresh, anti-terror law expert at SOAS, will give an introductory talk to accompany the screening.

“a masterpiece: one of the best films of the year”

Watch a trailer and book seats at: www.fljs.org/Court