The advanced language options are designed for students who already have at least intermediate command of a South Asian language. 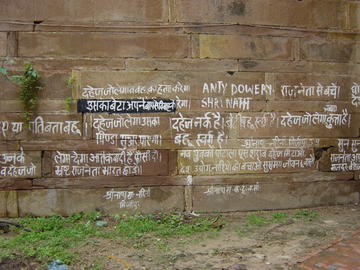 The image above shows graffiti protesting against dowry, Allahabad.

South Asia is the home to many hundreds of languages, among which Hindi, Urdu and Bengali are the most widely used. The command of a local language gives you direct contact with people who did not have access to a good English education, as well as with the multifaceted written and oral cultures of the region, of which only small parts are available in English translation. You will be able to reach out to people at a more grassroots level, to read documents of regional interest and to access fascinating literature and cultural discourse. A sound command of local languages is imperative for the proper understanding of modern media, especially cinema and television.

Hindi (that is, elementary Hindi) runs for the first two terms of the year with four or five contact hours each week and covers the entire grammar and basic vocabulary through Snell and Weightman's Teach Yourself Complete Hindi and other materials. Most other courses operate through reading, discussing and writing about a select range of literary texts. Hours vary, but as a minimum, classes run for at least two hours per week, over two terms. Along with a close reading and translation of the texts, their socio-cultural context is also presented and sessions normally include a discussion of some passage read earlier in the target language. Students will normally be given a vocabulary list and asked to prepare texts and sometimes short essays. They will sometimes have to present short essays about various topics related to the texts. The course normally presents a 5-10 hour weekly workload including both class time and outside-class preparation through each of the three terms. Hindi is an intensive course running for only two terms so the workload during these terms is proportionately higher.

The texts read in the non-elementary classes vary each term but they normally include short stories for the modern options and poetry for the Classical Hindi/Hindavi option from both classic and lesser known authors. More accessible texts are read in Michaelmas term and more specialised classes are held later.